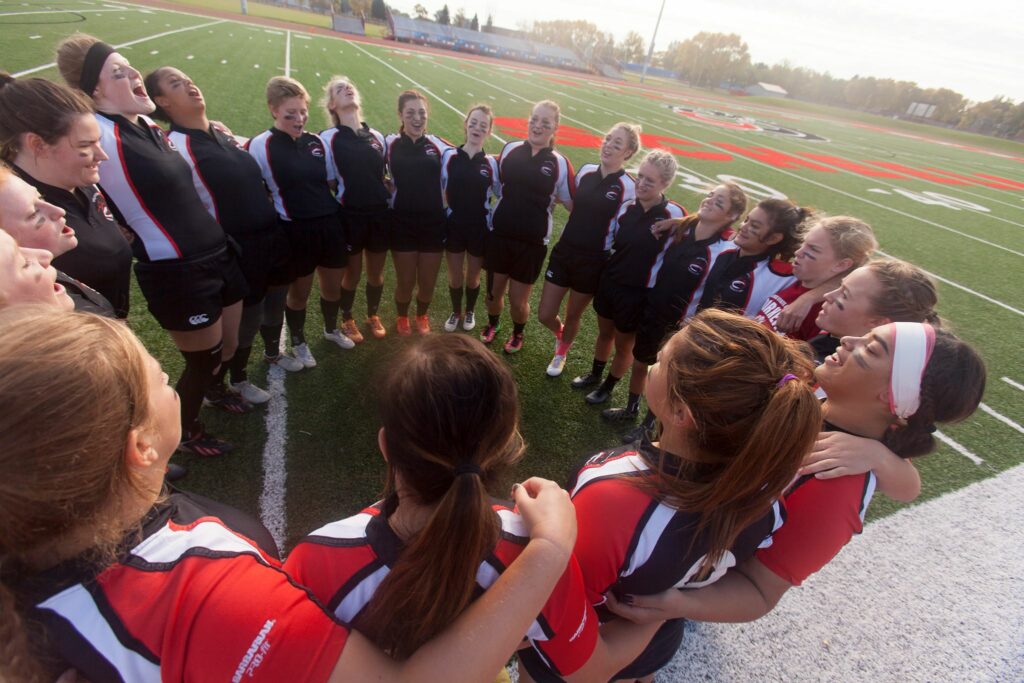 Welcome to this week’s “Feature Tuesday”! This week we are featuring MSUM Women’s Rugby Club – read the article below to find out about Women’s Rugby and their season.

Women’s Rugby had a restructuring at the beginning of the season starting at the All-Minnesota Tournament. From this tournament, they were able to figure out how to fill the positions left by last year’s seniors and how to integrate the new players.

“Luckily the new players gained confidence at every practice and were able to execute the right skills at our league games,” said coach Athena Aitken. “Our returning players gave excellent guidance and motivated the team to a league season where we only conceded 14 points from four games.”

For those who do not understand how rugby works on a league level, here is the breakdown. USA Rugby oversees all rugby at all levels in the United States which is divided into groups/unions split up by region. The MSUM Women’s Rugby belongs to the Minnesota Rugby Union which is made up of women’s and men’s teams from Minnesota, North Dakota, Wisconsin, and Iowa. The teams are made up of high school, senior, and, by a large majority, college teams.

“The teams in the same region do not necessarily play each other; however, with some schools having considerably more resources than the next. The college teams play in their school’s NCAA designation (with exceptions). Division 1 schools such as the University of Minnesota play other division 1 schools, though they may be in another region. Division 2 schools, such as NDSU, play other Division 2 schools,” Aitken said.

The MSUM Women’s Rugby Club is in a division called the “National Small College Rugby Organization” (NSCRO), which only admits teams when their college’s enrollment numbers are under a certain threshold. This division allows small colleges to be competitive with each other without the worry of playing against larger schools that have the potential to have more resources available to them.

Like MSUM Women’s Rugby, once any college team qualifies for playoffs, they travel out of the region and play with other teams in their division. Before this year’s regional playoffs, Women’s Rugby were ranked number one in NSCRO after winning the national championship in 2015 in North Carolina.

MSUM Women’s Rugby advanced to the regional playoffs this season where they played against Wayne State University resulting in a 31-10 loss. Although their season is over, Aitken says there is much to gain from the sport.

“Rugby is a great way to make friends. Some people join our team in groups as freshmen while others find us a little later in their college years. We have a great team culture on and off the field and in the gym. It can be daunting and a little frustrating at times to learn a completely new sport, but it’s a joy to teach rugby to new players and watch them grown with the team and grow in individual skills,” Aitken said.

If you yourself are interested in joining MSUM Women’s Rugby Club for next year’s season, Aitken, an MSUM 2012 alum, encourages you to join.

“Most players say they gain confidence in their personal lives after finding rugby because you have to be aware of what you can physically do to tackle and get tackled and to get back up. Because rugby is so physical, it is a game for everyone and anyone. There are positions for the big and powerful, the small and nimble, the tall, the short, and even the slow!”

Although the season is over for Women’s Rugby, they had a great season and look forward to see what next years has in store. If you would like more information about MSUM Women’s Rugby, you can find them on Facebook and Twitter. You can also find the Minnesota Rugby Union page here.

Check back on Tuesday for the next “Feature Tuesday”!