Six MSUM students volunteered at the 10th annual Dakota Nights astronomy festival at Theodore Roosevelt National Park Sep 16-18, 2022. They set up several telescope for evening star viewing and gave visual tours of the constellations using laser pointers. Five of the students, Alex Niemi, Emily Watson, Izzy DiOrio, Mara DeRung, and Tanner Weyer, have majors in the Department of Physics and Astronomy and one, MJ West, is a major in Biosciences. Two of them initially learned the constellations at the MSUM Planetarium, and the ones who set up telescopes practiced at the MSUM Regional Science Center.

Park Superintendent Angie Richman thanked the students for their role in making the weekend a success. Assistant Superintendent Maureen McGee-Ballinger expressed her appreciation for the students who put together a last-minute presentation for visitors when the weather on Saturday turned cloudy during the time solar viewing had been planned. 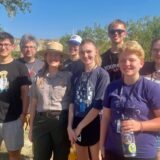